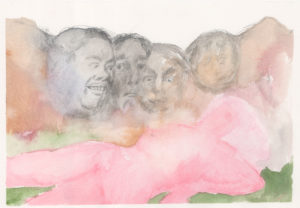 A series of paintings exploring the female experience in the realm of patriarchal culture.

The work consists of 2 chapters: 1st chapter expresses the external experience of being a woman in patriarchal culture, the 2nd chapter (‘The Flip’) manifests the internal reaction of the artist to this experience.

Ania Yilmaz describes her experience through reinterpretations of the artworks belonging to the Western canon.

Being a women in patriarchal culture is linked with experience of abuse, objectification,
unequal and condescending treatment, being silenced and powerless against
institutionalized male power.

Ania Yilmaz in her work reflects on those experiences. She confronts how, growing up, she has internalized the male perspective, unable to relate to the concept of passive femininity, the female experience in cultural texts being unrepresented and diminished.

In ‘Shhh(e)…’ she refers to works of art from Western canon ( i.e. ‘Susanna and the Elders’ by Rubens, ‘Christ and Adulteress’ by Lucas Cranach The Younger, ‘Procuress’ by Vermeer), that signify the female experience of living in patriarchal power structure. She shows how those codes of behavior are at the bases of Western culture and we are entangled in them till this very day. In her paintings she talks about her own experience of male abuse and structural domination, but with awareness that the experience is not individual, as it is inherent to the patriarchal culture.

In history of art women exist to be looked at, not to act and exercise the power. In ‘Shhh(e)…’ the artist repeats the paintings that signify the ‘male gaze’ to expose the cultural mechanism of objectification of female body by male authors.

The 2nd chapter is a playful expression of female power and disagreement to the status quo of male dominance, exposing the emptiness/illusion of the male power (myth necessary for maintaining the patriarchal reign). In order to deflate the balloon of patriarchy the artist creates images of female rebellion and domination over the archetypical ‘white men’ (the patriarch, culture-maker, colonialist, considering himself the vitruvian, universal man, an alleged “measure of all things)

This counter narrative is based on reworking the paintings from Western canon, that before expressed the paradigms of male domination. By playing with the imagery from history of art and reversing its narration/power structure Ania Yilmaz reclaims the canonical narration – in agreement with her inner feeling of power (and anger). Through change of the roles in the historical paintings (men taking the role of the women) she invites the spectators to face what happens in them when the structure of domination is reversed (it might be the exposure of actual, patriarchal structure coded in the works she is referring to/cultural texts, or empowerment, fun, or fear, discomfort or an impulse to ask the question how to escape the paradigm of any domination).

The anger, after centuries of patriarchal abuse, should be expressed, not repressed, in order for healing and change to happen. Through creating a vision of female power Ania Yilmaz vocally disagrees with the narration of male power as superior to female.

• The work expresses a personal, intimate experience of being a women burdened by patriarchal culture (its heritage and the lived experience) and I wanted to create an experience of total immersion of the viewer in my internal world.

• First (outside of the closed space) the viewer encounters the images from the 1st chapter (creating an image of male abuse of power – referring to the outside world and its effect on female experience.)

• Then appears the entrance in the shape of giant vagina – the viewer enters the vagina (reversing the experience of going out of it-being born). Passing through it, the viewer is in a room where another narration appears – opposite to the one from the ‘outside world’

• Installation in a shape of vagina as the entrance: you are the most deep in the (female) artists self (the most deep/ intimate/ mysterious/elusive part of her). The act of entering itself creates an impact on the viewer.

• The space that the viewer entered is full with paintings, abundant and overwhelming to the spectator, full of colors, different sizes and mediums. In this space the male dominance from the outside is completely disregarded and reversed. You see women entertaining their power over men (throwing them up to the sky, squeezing their nipples, dangling them head down holding their little penises between two fingers). You are seeing the immediate, flowering thoughts of a woman who experiences her inner feeling of power – they are appearing on the surface of consciousness to be fast proceeded by the next ones, some of them will stay in the memory, some will get lost in the abundance and the pace of the thoughts proceeding each other, some of them are reoccurring, with slight changes or seen in different angles/ combinations.

Ania Yilmaz is an artist and illustrator. Visit her website for more works: www.aniayilmaz.com