Man is condemned to be free 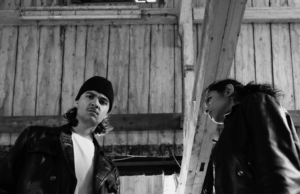 (Watch the roughcut of WOUT at the bottom of this page)

A socially anxious and indecisive man lives as reclusively as possible, with a baby duck at an abandoned house.

The main character “Wout” is better at understanding animals than people.

One day a woman with a dog comes along and is out to take over his house and possessions, invites herself into his life and walks all over him.

Wout does not take action. He does not understand the rules and codes that people live by. When the woman tries to eat his baby duck and Wout does not intervene, he feels that he is forced to take action, otherwise everything he loves would slip away from him. But how does he do this if he finds it difficult to distinguish between the right and wrong? Because of his doubts about choices in his life, Wout develops a strong desire for something to hold on to, for example religion. Then there is a mysterious message on his computer that says “I don’t exist”.

This drives him to take action and send away the woman in his own way because he thinks his privacy is being violated, leaving him alone and happy with his baby duck and a new dog.

The circumstances and process of making this film were more absurd then the movie turned out to be.

For the film Wout I wanted to capture an absurdist picture of the question ‘how to deal with the enormous freedom of life?” Actually everyone has their own way of being aware, which only makes choosing the “right guide” more difficult.

In my film, the main character is unable to read social cues or codes and this results in him being confused when confronted with them.

The “socially weak” protagonist Wout lets himself get influenced by a woman that decides to intrude his life and criticise him and test power over him.

In the film I want to show how difficult it is to be your own moral compass and how to act upon it, what is right and what is wrong?

I come from the generation where many children were labeled “different”, which entails both good and bad things. For example, that you get help easier from schools but also that people that might be showing just a little antisocial behavior will be called autistic by the superficial eye that doesn’t understand what it actually is.

I myself have been diagnosed with Tourette and ADHD, putting a bit of myself in the character of Wout (Again no it’s not entirely me) but in the sense that I care and understand the fact that having to deal with so many social expectations can make you passive. Especially if you don’t always understand these expectations.

I chose a situation that doesn’t have a label to capture the socially withdrawn protagonist because it doesn’t matter what he has.

I chose to not let him understand the outside world at all, as most people don’t quite do (but pretend they do). Some people in particular. If you do not understand the codes of conduct, it is not difficult to drown in society. All people have to deal with the freedom of choices in life, some find their own moral compass in religion or other forms of subculture, maybe through a friend you think is right or something that happens to you.

Wout has withdrawn himself into his own little world, but at this point in his life still receives stimuli from the outside in the form of an evil woman.

However the main message I want to convey with this film is that even if you live such a secluded existence, you are still forced to stand up for yourself, to get or keep a place, no matter how small and rotten that place is . Only how can you stand up for yourself if you want to be “good”, but the distinction between “good” and “bad” is unclear? You will have to make choices, because not making choices also has consequences and can harm others or yourself.

Wout becomes aware of this.

I chose an absurdist form because it is who I feel like I am since I was a child (not that I ever became anything more then that).

As a six year old I had an obsession with The bible, Icons, the stories from the greek mythology that my grandpa told me while looking for shells on the greek beach, I was obsessed with small greek temples and churches also to run inside of as fast as I could for some reason.

I asked my grandpa how do you think the universe started out like every child does.

He said he thought out of vibration, I thought that vibration should have been caused by something so I thought a lot and concluded that everything exists as a reaction to the fact that nothing actually exists and I thought it was beautiful so I started screaming it to everyone.

I like that absurdism doesn’t pretend to have an answer, just like I don’t have an answer. Life is irrational, there is no logic. You have to find your own purpose and this is what the protagonist finds.

After all we are all still the same troglodytes focusing on finding the right random stuff to do to fill our time with.

In my opinion all people consciously or subconsciously actually want to live and die as individualistic as possible.

This is why I think polarisation is the effect of digitalisation.

Science focuses on how to make it easier for ourselves, but in the end it is still all within ourselves.

Metaphorically speaking Wout finds the state of “Nirvana” in the end of the film. 🙂

You can see my research document

made during the RASL minor here:

Watch the Roughcut of WOUT here: